I've been nominated for this award. There are about 20 more women who were nominated, but I don't know who they are and will meet them on Sunday. Here's the letter I received in February from El Diario:

It is with great honor that I inform you of your nomination as a recipient of the 2010 “Mujeres Destacadas Award” a recognition given annually by El Diario La Prensa to the most outstanding women in our community.

Congratulations! As an honoree, you would be in the company of some of the Tri-state area’s most successful and influential Latinas making strides in the corporate, business, entertainment, sports and community arenas. The one request that we have for all recipients is that they be present to accept the award.

Now celebrating ‘Los Quinces,’ the “Mujeres Destacadas Awards” will be presented at a luncheon in the exclusive [Edited Out by Yours Truly] Hotel, on Sunday, April 18, 2010 at 12pm, sharp!! Please keep in mind that the luncheon is a private business event and capacity is limited.

If you accept the nomination, you will be featured in the special supplement published to recognize the accomplishments of all the “Mujeres Destacadas” recipients, highlighting each individual’s successes and contributions to the Latino community. We will need you to contact M. upon receipt of this letter to set-up an interview and photo shoot as soon as possible. In the meantime, you may fax or email her your updated bio and/or resume.

Once again congratulations on your nomination!!

I've not been "in the know" of this award so I did some searching. I found the nominees for 2009 which included Sonia Sotomayor and Soledad O'Brien. When I went to get my foto taken and be interviewed I asked how they chose and found out about our work. My contact shared that it was a group selection process. People suggest folks to the group and then they pick from that grouping. I'm thinking they found/remember me from my article about pornography in the paper in February, which was pro-porn, and focused on positive sexuality.

The event is Sunday and I don't know what to expect or what will happen. I know I'll be networking with the other nominees, and that tickets for the event are pretty pricey. Let's say if I wasn't nominated there would be NO way I could afford to attend on my own.

So, if you are in NYC pick up El Diario this Sunday when there will be a special supplement featuring us! If you are online check us out there too!
Posted by La Bianca at 6:14 PM 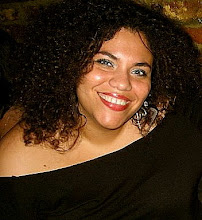